The group, collectively known as the 4201 Schools Association, takes its name and identity from the State Education Law authorizing public funding for this specially authorized group of schools serving infants through 12th grade.

The Association members traveled to the U.S. Capitol to fight for the needs of children across the country who are part of the disability community and would benefit from the enactment of two specific pieces of legislation being considered by Congress – known informally as Cogswell-Macy and IDEA. More specifically, the bills would expand resources and services, increase research, enhance state and federal accountability, and ensure specialized instruction for those who are blind, deaf, and deaf-blind. Funding for the IDEA Act and enactment of the Cogswell-Macy Act would vastly improve the education and chances of lifelong employment for these students. 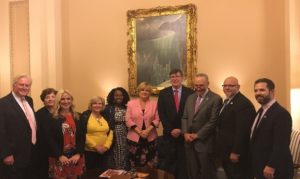 “We had three primary goals during our DC visit: 1) Raise awareness across in the New York delegation of the Cogswell Macy Act and IDEA funding; 2) convert awareness into a political priority for New York’s representatives; and 3) provide our representatives with sufficient information to advocate for nationwide support during the 115th Congress.” said Bernadette Kappen, Ph.D., Chair of the Association.”

The mission of the nine member Association is to enhance and advocate for the education and future of New York’s children with low-incidence disabilities. The schools are achievement-oriented and provide constructive learning environments for children requiring teachers with specialized training and experience.