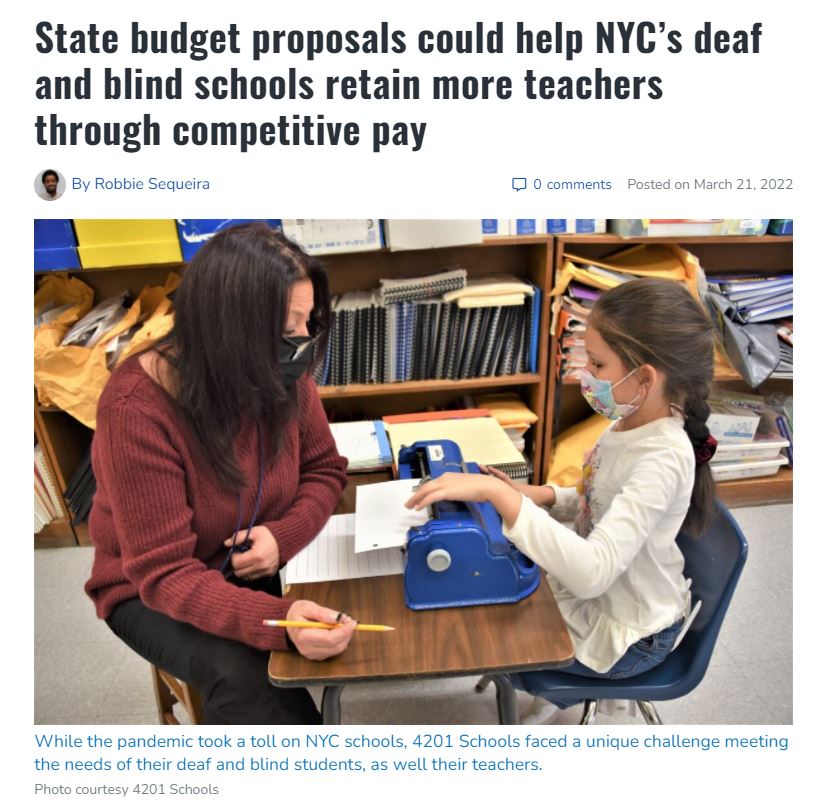 The Bronx Times recently wrote a story, featuring three of the 4201 Schools Association members located in the Bronx, highlighting the need for additional funding for the entire association of schools.

Posted on March 21, 2022 – From administrators to teachers and students, the COVID-19 pandemic has taken its toll on New York’s school systems. Perhaps no school had more unique challenges through the pandemic than 4201 Schools — not-for-profit, state-supported schools serving students who are deaf, blind, and severely physically disabled.

For those 10 specialized schools throughout New York state, three of which are located in the Bronx, an increase in state funding which includes $11.6 million in the state Assembly’s one-house budget proposal and $30 million in the state Senate’s budget, could help with areas of need such as teacher retainment.

The Senate’s proposal, a $30 million investment over three years, includes a fiscal reserve fund that would allow schools to prepare for contingencies throughout the school year and offer competitive salaries. Funding will also allow schools to purchase Braille and other large print textbooks, as well as other adaptive learning materials, 4201 Schools administrators said.

On average, NYC public school teachers earn $65,904, and several 4201 Schools teachers told the Bronx Times they are making well less than that — estimating a near $20,000 differential in pay. That pay disparity makes it hard to reject job offers from other school systems, despite their passion working with deaf and blind students, 4201 Schools teachers said.